The Things They Carried by Tim O'Brien

Pensacola State College has selected The Things They Carried by Tim O'Brien as the common read for the Vietnam War Memory Project.

A finalist for both the 1990 Pulitzer Prize and the National Book Critics Circle Award, The Things They Carried marks a subtle but definitive line of demarcation between Tim O'Brien's earlier works about Vietnam, the memoir If I Die in a Combat Zone and the fictional Going After Cacciato, and this sly, almost hallucinatory book that is neither memoir nor novel nor collection of short stories but rather an artful combination of all three. Vietnam is still O'Brien's theme, but in this book he seems less interested in the war itself than in the myriad different perspectives from which he depicts it.

Going After Cacciato played with reality;  The Things They Carried plays with truth. The narrator of most of these stories is "Tim"; yet O'Brien freely admits that many of the events he chronicles in this collection never really happened. He never killed a man as "Tim" does in "The Man I Killed," and unlike Tim in "Ambush," he has no daughter named Kathleen. But just because a thing never happened doesn't make it any less true. In "On the Rainy River," the character Tim O'Brien responds to his draft notice by driving north, to the Canadian border where he spends six days in a deserted lodge in the company of an old man named Elroy while he wrestles with the choice between dodging the draft or going to war. The real Tim O'Brien never drove north, never found himself in a fishing boat 20 yards off the Canadian shore with a decision to make. The real Tim O'Brien quietly boarded the bus to Sioux Falls and was inducted into the United States Army. But the truth of "On the Rainy River" lies not in facts but in the genuineness of the experience it depicts: both Tims went to a war they didn't believe in; both considered themselves cowards for doing so. Every story in The Things They Carried speaks another truth that Tim O'Brien learned in Vietnam; it is this blurred line between truth and reality, fact and fiction, that makes his book unforgettable. --Alix Wilber

Locate the following articles and others like it in the library's Literary Reference Center Plus  and  Gale Literary Sources databases. You must login with your PSC library borrower ID and use your PIN.  Or, you can access PSC's library's website through your CANVAS course. 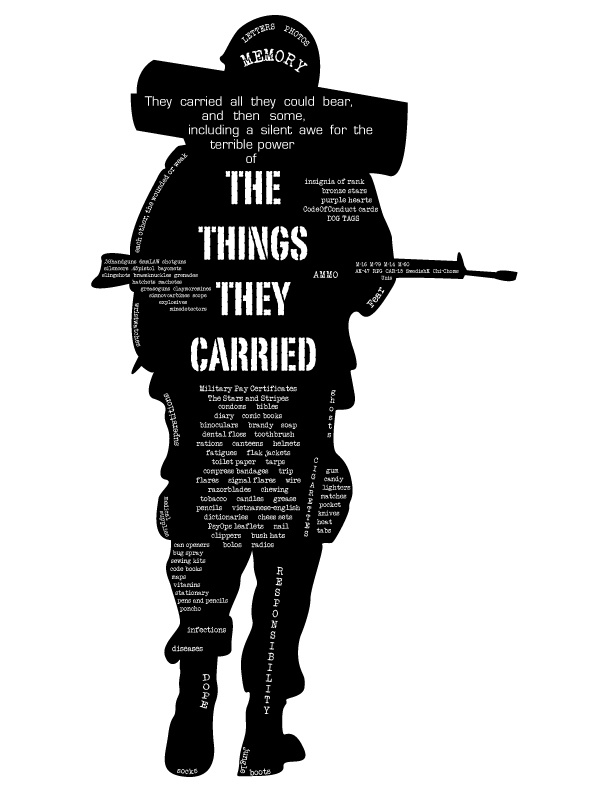 Other Schools' The Things They Carried Projects