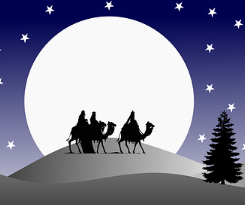 Closely related to Christmas, the holiday of Epiphany, or Three Kings' Day, celebrates the arrival of the Magi at the birthplace of Jesus, and the revelation of Jesus' divinity.

The holiday is also called Twelfth Night since it falls on the final day of the twelve days of Christmas.

On December 7, 1941, the Japanese made a surprise attack on the American Navy Base in Pearl Harbor, Hawaii.  This event began American involvement in World War II.

Christmas Around the World

Three Kings Day, (Día de los Reyes) is celebrated on January 6 in Spain and other Latin countries.  On the night of January 5, Hispanic children leave their shoes by the door, hoping that the three kings will place gifts in their shoes overnight.

The date of this holiday is related to the Christian celebration of Epiphany on January 6.

In Saigon (Ho Chi Minh City) Christmas is a gigantic fun-filled event.  About one million people take to the streets in mopeds and motorcycles to see massive decorations and light shows. Not to mention the wonderful food!

The Giant Lantern Festival is celebrated in the Filipino town of San Fernando, known as the Christmas Capital of the Philippines.  Light is an important Christian symbol to Filipinos, a symbol of light and hope.  The roots of this festival lay in a pre-Christmas Catholic novena known as Lubenas.

First celebrated in 1967, Toronto's Cavalcade of Lights marks the beginning of the holiday season. The celebration includes fireworks, ice skating and free concerts.

St. Nick brings gifts to the good children, and Krampus punishes the bad children with pain.  ​Son of the Norse god of the underworld, Krampus is a half-goat, half-demon counterpart to kind Saint Nick.  On the night of December 5, when Krampus reigns, he may beat bad children with sticks or simply kidnap them and take them to hell.

Pickpockets Trish Tracy and her niece are caught in the act of fleecing department store customers who are Christmas shopping.  Security guard Bert is assigned as the custodian of the duo in his tiny apartment, where Trish and Bert find they are attracted to each other. 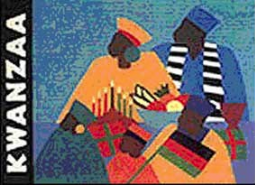 Kwanzaa is a week-long celebration celebrated in the United States and in other countries with African descendants. It honors African culture in the African-American and World African communities.