Arlington Cemetery: Changing of the Guard

Memorial Day is observed on the last Monday in May.

In the United States, Mother's Day falls on the second Sunday in May.

Galvez assisted the newly formed United States in the Revolutionary War, defeating the British at the Siege of Pensacola (1781).  The British lost a crucial military foothold on the Gulf coast, which turned the Revolutionary War in the U.S.' favor.  For his invaluable war efforts, Galvez became an honorary citizen of the United States in 2014.  The Texas city of Galveston is named after him.

Before the advent of antibiotics, thousands of sick immigrants were detained and treated at the immigrant hospital on Ellis Island. Only after recovering were they allowed to enter the United States. This precaution protected the American population from diseases carried by some new immigrants.

May Day is celebrated for two reasons: 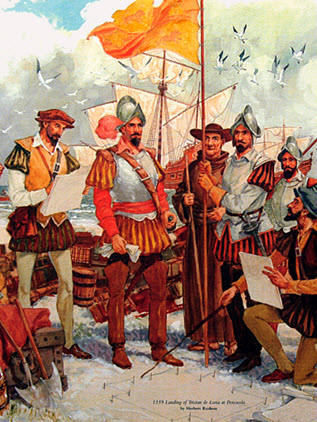 One month after the settlement of Pensacola was founded, a hurricane sank most of the ships, still carrying supplies.  Two years later the survivors were rescued by the Spanish and returned to Cuba.

The area was not settled again by Europeans until 1698, by Spanish forces.